Good news has it that the fascist demo called in Calais on the 25th January did not happen: actually the nazis called by the far right collective Sauvons Calais did not turn up, or where nowhere to be seen. Instead, many antifa and no borders activists turned up. Many thanks to them, it is them who keep the streets clear of violent fascists!

In Dover about 30 fascists of the worst sort gathered; the antifa were slightly more numerous… and the fascists had the reception they deserved.  A good report of what happened can be found on

There are approximately 2000 migrants in Calais – numbers have gone down slightly in the cold season; over 2500 in the Calais area. They mostly come from the most war torn countries in the world: Eritrea, Sudan, Afghanistan, Syria, Ethiopia. Many are women – some 200 women in Calais alone – young children, very many unaccompanied minors, some very young. The women’s house is full, and many women end up sleeping in the jungles. 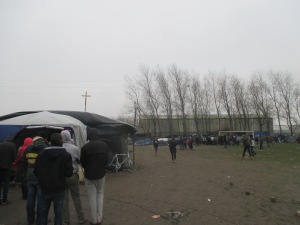 People are surviving in appalling conditions, as we have denounced for years, and as in the Human Rights Watch report that has just come out: they are living in shacks and tents, in the freezing cold, with no toilets, no electricity, no running water – there is a water point for use of the fire brigade near the jungle by the Tioxide factory, serving some 1500 people, many of whom are women and children: it has been ‘illegally’ opened after another water point was closed down, and the Council has closed it several times – people keep re-opening it; near the Sudanese camp there is no water at all. 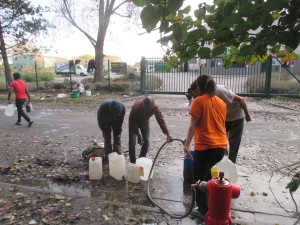 Police violence has escalated to unprecedented levels – as we keep denouncing, and as in the Human Rights Watch report. HRW quotes several cases of people beaten unconscious, some left with broken bones, women included, beaten/ abused/ sprayed with CS gas, women and children included. Police are not currently going into the camps, but are very active on the roads and motorways, particularly against those who are trying to cross: they go and stop them with truncheons and gas, and we cannot count the numbers of people injured on a daily basis.

The numbers of deaths and injuries in the past year has gone up exponentially: at least 15 died in 2014. The most common cause of death is being hit by cars on the  motorway, and many people run on the motorway to escape police; police gas people at close range, whence they run without seeing where they are going; in one instance, activists report CRS policemen jumping on the motorway to scare a group of Eritreans, with the clear purpose of sending them running on the motorway. 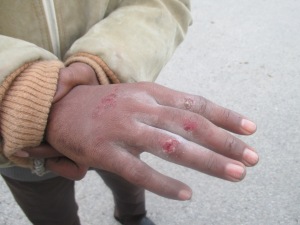 There has been a rise in arbitrary arrests. The Sudanese community has been particularly targeted,  Darfuri arrested and threatened to be deported to Sudan: usually the judges release them because there is no realistic prospect of actually deport them to their country, and the European Court of Human Rights has stopped two such deportations. People are ill treated during arrest: in one case a group of Sudanese were left without food or water for 22 hours.

People are being pressurized in applying for asylum in France. Many have done so, many asylum seekers are still sleeping in the jungles. It can take up to 2 or 3  years before they get an answer, and many are left homeless and destitute all this time, including people with serious mental health problems. The rate of refusals is very high: only about 30 per cent of asylum applications are accepted and the those who are refused and left in an awkward position: unable to return to their countries because they are too dangerous; surviving on the streets because they cannot work or get a house.

Racist attacks against migrants  have multiplied since the nazi demo 7th September 2014, that attracted some of the worst elements of the French far right. No Borders activists, antifascists, members of local associations in support of migrants get also attacked and threatened. Usually it is isolated individuals who get attacked, especially late at night. A squat inhabited by Egyptians was bombed with molotovs; a few days ago some Syrians who are sleeping out had three shots fired at them from a  blue van, that was later spotted near the jungle Tioxide; it was a pallet gun not a machine gun, however it was dangerous and scary. Three migrants were shot at and injured with real guns last year, two in Calais and one near Dunkerque.

The fascists are opposed to the new day centre Jules-Ferry because they say it will encourage migrants to stay in Calais. We think that is an idiocy born by ignorance and lack of thought, and refugees and other migrants come for very pressing reasons, such as imperialistic wars, or wars by proxy for the control resources; the pillage of resources in Africa and Asia by Western multinationals is the main factor behind mass migration and there is no point in stepping up the building of walls to try contain the human misery capitalism and Western intervention have caused. 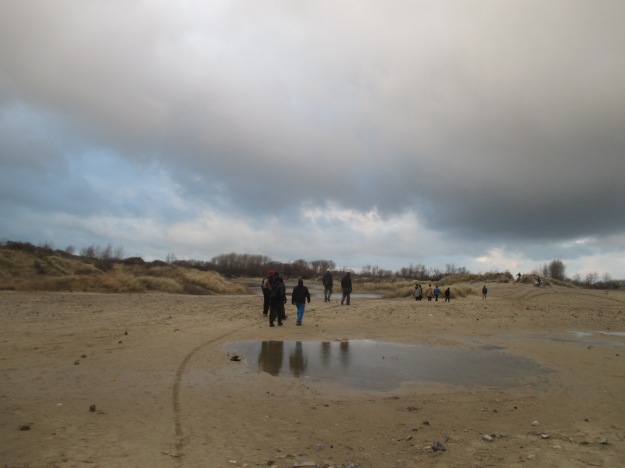 We are opposed to the day centre Jules-Ferry for completely different reasons, first of all because the project is insane: people are supposed to move to a new jungle, far from town and far from the eyes, around a day centre that is in the middle of nowhere; there, the authorities say, they will be ‘tolerated’. It is a further exercise in repression, and trying to make migrants invisible, cut off society and an easy target for police and other violent racists. There will be not accommodation by night, except for 100 women and children who will be allowed to sleep there – there are well over 500 women and children if you count the minors under 16. The Minister of Interior Bernard Cazeneuve is strongly opposed to any accommodation by night. The mayor Natacha Bouchart has called for the creation of some bed spaces, in a refugee camp ‘similar to those in Darfur’, in her own words. Last year Bouchart was leading the crusade to close all jungles and squats, leading to brutal evictions and mass arrests.

The new day centre recently started giving meals only, in some big tents outside. One meal per day only. The management of the centre has been given to an associations of Arras, La Vie Active, who have never worked in Calais. The local associations who supported the migrants for years are afraid to speak, least they get stopped from going to the centre – activists and other sympathizers have been stopped from going there already! 200 people on  average are going to the centre for the meals. They have been repeatedly stopped by police for ID controls on their way to the centre, which strenghtens suspicions the centre could be working as a place to control and identify migrants, as an accessory to the detention and deportation process. 200 on 2000 migrants are attending the food distributions. Most say it is too far. People are cooking in their camps and squats. They need ingredients: if you can please send food to cook; or money to buy it; or organize a collection!
However all camps and squat are under eviction, including Tioxide (900 people approx), the Afghan jungle (300), the squat Galloo opened by No Borders (300) and the Sudanese jungle (200+). They could be evicted any time, however evictions may start when it is less cold, or around the opening date of the day centre Jules-Ferry, that is scheduled for the 5th of April, after works will be completed. So there is still time to fight against the centre, prepare to resist the evictions, think of alternative solutions to provide some real relief to the refugee crisis in Calais. There is little scope to be optimistic: the attitude of the authorities is to provide more controls, and more repression against migrants, in Calais and everywhere. Europe has pledged 3.7 million for Calais. Hope all that money (that ultimately comes from taxes workers pay) gets spent to help migrant people, not to build more ghettos, more fences and more detention facilities; hope it does not get wasted on crazy and useless project such as the day centre Jules-Ferry!
Fight the borders, in Calais and everywhere! 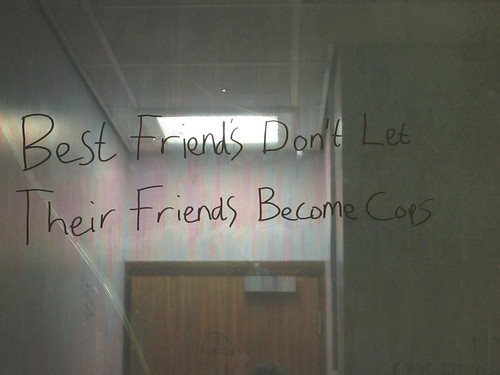